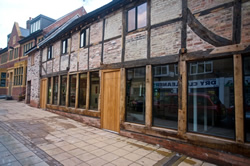 PCPT’s work in Far Gosford Street, Coventry, has received a further clutch of awards at a ceremony in Birmingham’s International Convention Centre on Friday 4th July.

Harrabin Construction, the contractors under a traditional JCT Contract, administered by PCPT, received the Built in Quality awards for 38-40 Far Gosford Street and PCPT received the WMCEE Heritage Award for the work in the street with CDP and Coventry City Council as the clients.

With 30 English Heritage Listed and locally listed buildings from almost every generation since the early 16th century, the street is a survivor and these awards come at the end of the first phase which has focused on bringing the existing – especially the historic – fabric of the street into use. The next phase follows on from the Compulsory Purchase Order award made in the spring that should see the ‘straggler’ development coming forward and then the construction of modern infill in a courtyard setting lining Sky Blue Way starting later this year.

With a shortlisting of three projects across two categories in the awards, as Ralph Minott of Calthorpe Estates says, it is ‘a testament to PCPT, being part of so much that heritage stands for in the region’.