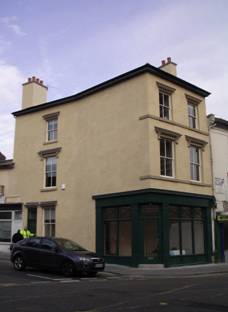 The main building dates from Victorian period but there is an older Georgian property hiding underneath. Underneath that there is also some evidence of a much earlier stone building (1650’s?). The older existing shop-front dates from the 1920’s. Photographic evidence was used to refurbishment the shop front and return it to 1920’s style including moving the door back to the corner.