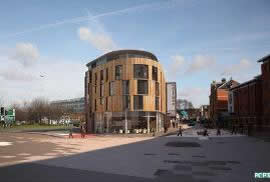 PCPT are delighted to announce that they were part of last weeks winning team, the Fargo Partnership, as Fargosford Street, Coventry won the Regeneration Award at the Insider Property Awards 2010, which were held at the Hilton Birmingham Metropole hotel at the NEC.

The plan is to turn a run down edge of Coventry city centre into a thriving area of creative businesses and alternative retail and leisure. The plan is extremely complex and the judges were impresses by the level and depth of cooperation shown by the partnership members.

A wide initiative of refurbishment along the street from a variety of funding sources including private, AWM, English Heritage and THI routes and a programme of new build to establish a learning environment adjacent to the university in a dynamic contextual way involving the best of all ages of building along the length of the street renovated or new complimentary infill. The area is named ‘Fargo’ with real time web access, an art village in the derelict industrial sheds and a science park environment of new buildings in courtyards accessed off the street via arches and ginnels.

As architects and masterplanners PCPT are working with the rest of the Partnership to secure a future for the street in a holistic way. PCPT have had an involvement in the original scoping of the street, the early submission for Lottery Funding (Townscape Heritage Initiative 2006) and the masterplan and specific building projects.